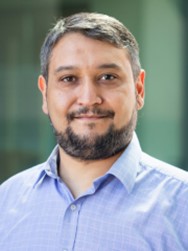 Dr Bilal is the Specialist Prosthodontist at Keperra Dental Surgery.

Dr Bilal is an expert in the field of crowns, bridges, dentures, and implant dentistry, he is an alumnus of The University of Melbourne where he received specialist training in Prosthodontics and was awarded Doctor of Clinical Dentistry in 2005.

Dr. El Masoud finished his BDS from Jordan University of Science (JUST) and Technology, Jordan in 1999. In 2002 He commenced his postgraduate studies at The University of Melbourne where he was awarded his Doctor of Clinical Dentistry in Prosthodontics (2005). Dr. El Masoud is also a fellow of the Royal Australasian College of Dental Surgeons in both general dentistry and the special field of Prosthodontics. He worked as an Assistant Professor in the department of dentistry at JUST for eight years during which he was appointed as the head of the department for three years. In 2014 he worked as a consultant prosthodontist at King Faisal Specialist Hospital and Research Centre where he treated complicated prosthodontic cases. Since 2015 he moved to Australia and has been working with Australia’s greatest universities (UQ and CSU) as a clinical academic and was treating patients in his private practice. He believes that each patient deserves to receive the best treatment that would satisfy their needs. Dr El Masoud is an expert in the field of crowns, bridges, dentures, and implant dentistry.